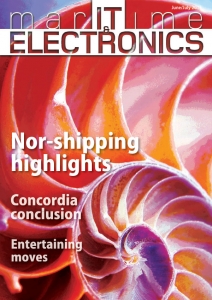 We tend to take it for granted that cash will always be there, however government backed currencies are in fact a relatively new invention. For most of history, commodities were a much more reliable store of wealth. Indeed, during spates of currency instability (and more recently following the credit crunch), gold and other metals often see a revival in popularity. But commodities also are open to a degree of manipulation – partly because they have to be traded using politically-based fiat currencies and partly because they can be hoarded. Hence, the interest surrounding Bitcoin, a math based ‘crypto-currency’, which captured the public imagination earlier this year, as a safe-haven befitting an Internet-powered society. Whether or not it will survive is open to question. At sea, however, cash still reigns supreme. As a result, shipping companies are faced with an expensive logistical problem of delivering cash to their vessels. Cash is always required onboard and is used for crew advances as well as provisions and emergency expenses by captains. Companies generally limit the amount of cash that can be drawn onboard by their crew due to the high cost of delivering currency to vessels throughout the world. It is estimated to cost 5 per cent or more to deliver currency to vessels.

In an attempt to reduce this overhead, ShipMoney, a US-based payments company, has introduced two new prepaid Visa cards designed specifically to meet the needs of captains and crew members. CrewCash and ShipMoney are designed to provide an efficient and cost-effective alternative to the delivery of currency to ships. The underlying philosophy is to reduce the number of cash deliveries and the amount of cash held onboard, thereby cutting costs. CrewCash offers an alternative to onboard cash advances and works like any other Visa debit card anywhere in the world. With CrewCash, crew members can receive their pay, send money to family or friends, withdraw local currency at ATMs, make purchases using their card at stores, restaurants, or online. CrewCash is expected to make it easier for crew to receive their wages, is less expensive to convert to their home currency and is safer than carrying cash. Cardholders do not need a bank account and there is no credit check. ShipMoney is a prepaid Visa purchasing card for captains. It provides them with a financial tool for provisions, emergency and other ship expenses. ShipMoney can be loaded and unloaded with funds any time of day, any day of the year, offering maximum flexibility to the onboard treasury function at the lowest possible cost.

ShipMoney is fully customizable and can be configured to include or exclude ATM access, as well as restricting merchants by merchant category codes. For example, ShipMoney cards can be restricted for use at casinos or similar venues where captains should not be spending company funds. The card program includes real-time and downloadable expense reporting so corporate accounting will always be informed and in control. In addition to reducing costs, CrewCash will offer shipping companies a solution to crew remittances that meets requirements set down in the Maritime Labor Convention, in which Regulation 2.2 states: Each Member shall require that ship owners take measures… ‘to provide seafarers with a means to transmit all or part of their earnings to their families or dependents or legal beneficiaries…and… a system for enabling seafarers, at the time of their entering employment or during it to allot… a proportion of their wages for remittance…’

US-based satcoms reseller Globe Wireless entered into a sales and marketing relationship with CrewCash. ‘As a leading provider of communications, operational and IT solutions to the maritime industry, we are perfectly positioned to introduce CrewCash and ShipMoney,’ stated company chief-exec David Kagan. ‘We are very excited to introduce a new benefit to crew members while
saving shipping companies money.”

We’ve love to give you a personal demo of the company dashboard (“company control centre”) to show you how easy it is to manage the crew salary process with our E-Wallet.

If you’re not ready for that yet, please check out our home page for shipping companies.

If you are a seafarer / member of crew / customer:

Please don’t use this form. The quickest way for you to get your questions answered, or for customers to get help, is to email: compliance@shipmoney.com