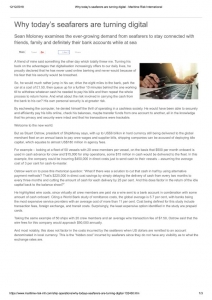 Sean Moloney examines the ever-growing demand from seafarers to stay connected with friends, family and definitely their bank accounts while at sea.

A friend of mine said something the other day which totally threw me. Turning his back on the advantages that digitalization increasingly offers to our daily lives, he proudly declared that he has never used online banking and never would because of his fear that his security would be breathed.

So, he would much rather Jump In his car, drive the eight miles to the bank, park the car at a cost of £1.50, then queue up for a further 10 minutes behind the one working till to withdraw whatever cash he needed to pay his bills and then repeat the whole process to return home. And what about the risk involved in carrying the cash from the bank to his car? His own personal security is at greater risk.

By eschewing the computer, he denied himself the thrill of operating in a cashless society. He would have been able to securely and efficiently pay his bills online, check his balances, maybe transfer funds from one account to another, all in the knowledge that his privacy and security were intact and that his transactions were trackable.

Welcome to the new world.

But as Stuart Ostrow, president of ShipMoney says, with up to US$6 billion in hard currency still being delivered to the global merchant fleet on an annual basis to pay crew wages and supplier bills, shipping companies can be accused of deploying idle capital, which equates to almost US$180 million in agency fees.

For example — looking at a fleet of 50 vessels with 20 crew members per vessel, on the basis that $500 per month onboard is used in cash advance for crew and $15,000 for ship operations, some $15 million in cash would be delivered to the fleet. In this example, the company could be incurring $450,000 in direct costs just to send cash to their vessels — assuming the average cost of 3 per cent for cash-to-master.

Ostrow went on to pose this rhetorical question: ‘What if there was a solution to cut that cash in half by using alternative payment methods? That’s $225,000 in direct cost savings by simply delaying the delivery of cash from every two months to every three months and cutting the amount of cash for each delivery by 25 per cent. And this does factor in the return of the idle capital back to the balance sheet?”

He highlighted wire costs, since virtually all crew members are paid via a wire sent to a bank account in combination with some amount of cash onboard. Citing a World Bank study of remittance costs, the global average is 5.7 per cent, with banks being the most expensive service providers with an average cost of more than 11 per cent. Cost being defined for this study include transaction fees, foreign exchange, and transit costs. Surprisingly, the least expensive option identified in the study are prepaid cards.

Taking the same example of 50 ships with 20 crew members and an average wire transaction fee of $7.50, Ostrow said that the wire fees for this company would approach $90,000 annually.

And most notably, this does not factor in the costs incurred by the seafarers when US dollars are remitted to an account denominated in local currency. This is the ‘hidden cost” incurred by seafarers since they do not have any visibility as to what the exchange rates are.

“As the industry continues to look for sustainable initiatives, why are seafarers incurring extra costs just from receiving their wages in cash? Sending money back home and exchanging money at port all add up to unnecessary costs for seafarers, in an age when wire-transfers and card payments are as regular as clockwork”, he said.

“By adopting a digital payment strategy and reducing the amount of cash onboard, masters and seafarers can build a sustainable initiative, which will save time and money. For seafarers, absorbing exchange rates and the cast of sending money can make a huge difference in their monthly pay packet. Using an online portal and reducing these costs will give seafarers more power over how much money they send home and how they spend it. This doesn’t mean to say that vessels should be cashless, rather just have less cash.

“Seafarers must be treated as a valuable and integral part of the team. And maritime companies should offer crew members financial access and flexibility similar to shoreside staff.

“In today’s digital world of real-time transactions that can be initiated anywhere and at any time, there is no reason why large volumes of cash are still sent to ships to pay crew wages arid onboard ship expenses. It is our mission to effectuate change in the maritime industry to adopt alternative financial solutions.”
So, prepaid cards are seen as the way forward but, as Greg O’Connell, EVP of European business development at ShipMoney, contended, while there Is no conscious push from the ship owners and managers to embrace the benefits of digitalization when It comes to tensioning money to a vessel, the industry Is finding itself forced to change because of society’s march away from cash in favor of, and increasing familiarization with, more secure and efficient forms of payment.

But with the drive towards digitalization shifting so quickly, and new disrupters emerging almost every day, how are maritime payment solutions providers such as ShipMoney remaining relevant and compelling to the marketplace?

O’Connell again: it’s a good question when based on my reply which would be that there are still nationalities and demographics in the market that lack access to e-commerce, via card or that It Is Just too expensive to use their awn cards. So, our platform will provide value from the outset Utley want access to their funds. This will drive behavior itself because ships are getting more Internet access onboard now. The question Is, how much Internet access, but it Is improving.

“There is still strong demand for prepayment cards coming from eastern Europe and beyond. A good example is Ukraine where the Ukrainian banking system is in default. This means It is very difficult for Ukrainians to get money out of their bank accounts, so what they like to do Is have a certain proportion of their funds placed on a card, so they can have access to their money and transfer funds to (for example) their wife’s companion card.’

Demand for change Is there but It begs the question as to whether the market Is quick enough to react Are the ship owners and the ship managers agile enough to move with the times? As O’Connell suggested, yes absolutely, but when the answer might be a subtle no, not yet, then payment solution providers have to be quick and agile enough themselves to plug the gap.

“If you look at our platform, we can conduct a manual card prepayment process or carry out an API link. API, or application programming interface, as it is known, is the digital platform so when your system talks to that operated by the owner or the managers, they can run a process from Excel payment and one bank transfer. But irrespective of the systems they employ, whether current or older legacy systems, ShipMoney has the capacity to incorporate this and there wouldn’t be an interruption to their normal workflow,” he said.

If the question is, are ship owners agile, and you put it into context of ShipMoney, then according to O’Connell the answer is yes on the basis that payment can still be made, manually or digitally. “This meets the needs of both current and legacy systems,” he said.