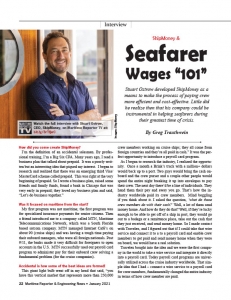 Stuart Ostrow developed ShipMoney as a means to make the process of paying crew more efficient and cost-effective. Little did he realize then that his company could be

instrumental in helping seafarers during their greatest time of crisis.

How did you come create ShipMoney?

I’m the definition of an accidental salesman. By profes­sional training, I’m a Big Six CPA. Many years ago, I read a business plan that talked about prepaid. It was a poorly writ­ten but an interesting idea that piqued my interest. I began to research and realized that there was an emerging third Visa/ MasterCard scheme called prepaid. This was right at the very beginning of prepaid. So I wrote a business plan, raised some friends and family funds, found a bank in Chicago that was very early in prepaid; they loved my business plan and said, “Let’s do business together.”

Was it focused on maritime from the start?

My first program was not maritime; the first program was for specialized insurance payments for senior citizens. Then a friend introduced me to a company called MTN, Maritime Telecommunications Network, which was a South Florida based satcom company. MTN managed Internet Café’s on about 90 (cruise ships) and was having a tough time paying their onboard managers, who were all foreign nationals. Post 9/11, the banks made it very difficult for foreigners to open accounts in the U.S. MTN successfully used our payroll card program to administer pay for their onboard crew solving a fundamental problem (for the cruise companies).

Accidental is how some of the best ideas are formed!

This giant light bulb went off in my head that said, “you have this vertical market that represents more than 250,000 crew members working on cruise ships; they all come from foreign countries and they’re all paid in cash.” It was the per­fect opportunity to introduce a payroll card program.

As I began to research the industry, I realized the opportu­nity. Once a month a Brink’s truck with a million+ dollars would back up to a port. Two guys would bring the cash on­board and the crew purser and a couple other people would spend the entire night breaking it up into envelopes to pay their crew. The next day there’d be a line of individuals. They hand them their pay and away you go. That’s how the in­dustry worldwide paid its crew members. Mind boggling if you think about it. I asked the question, ‘what do those crew members do with their cash?’ Well, a lot of them send money home. And how do they do that? Well, if they’re lucky enough to be able to get off of a ship in port, they would go out to a bodega or a remittance place, take out the cash that they just received, and send money home. So I made contact with Travelex, and I figured out that if I could take that wire service and connect it to a to a payroll card and enable crew members to get paid and send money home when they were on board, we would have a real solution.  Travelex bought into the idea and we were the first compa­ny in the world to take a wire service and integrate it directly into a payroll card. Today payroll card programs are univer­sally utilized across the cruise industry worldwide. That sim­ple idea that I had – connect a wire service to a payroll card for crew members, fundamentally changed the entire industry in terms of how crew members are paid.

It is somewhat risky and costly to funnel all of that cash?

Indeed it is. The commercial industry is a bit different in terms of how crew are paid compared to the cruise line industry. The commercial industry pays crew members via a combination of both cash onboard and a wire sent home. We did a presentation once a couple of years back in Manila at Crew Connect. And I did a back of the envelope calculation. If you look at the BIMCO estimate in terms of number of ships out there, call it 50,000 commercial vessels, and you take an estimate in terms of how much cash typically is on board at any one point in time, and how often cash is delivered, we calculated that somewhere in the order of $4 to $6 billion in cash being distributed in the commercial industry worldwide annually. And if you factor in the cost of delivering CTM (cash to master) at say at 3%, it’s a big number. Not only is there the cost to deliver the cash, but there’s also the capital cost of maintaining that cash on board. And the delivery of cash for crew payroll advances only represents one cost associated with paying commercial seafarers. It does not factor in fees and administrative burden associated with sending wire payments.

Do you see any positives coming out of this mammoth COVID-19 negative?

We are fortunate to have a growing portfolio of commercial clients and have signed a number of significant clients over the last nine months including Maersk and V.Ships. We think that this pandemic has finally shaken the industry to ask itself: ‘why do we need cash on board?’ (Plus), if you have 1,000, 2,000 or 5,000 crew members, you’re potentially doing 1,000 to 5,000 wires a month, which are expensive, difficult and inefficient to administer. ShipMoney solves both sides of the equation: it’s a more cost-effective way in terms of providing advances as opposed to cash. And it’s a much easier to administer and manage.

I think that one of the impacts of this pandemic has been a new appreciation for seafarers. The industry has realized how important seafarers are and is making concerted efforts in terms of taking care of them. We’ve always believed that ShipMoney is a crew welfare benefit.